I would rather, no I wouldn't, sit at home in my so man cave it's unreal, familiar world, that sometimes, just sometimes, I can forget what has happened

I keep having to stifle yelps of fear all the time. If a grown man keeps screaming at the slightest perceived danger to himself, despite there actually being no danger present at all, then one is going to give the impression that some paranoid generated delusion is actually trying to scare you but only in your brain. Note to self, just scream inside your head.

I am of course sitting in the passenger seat of the car that is driving along quite normally with the driver chitchatting away with me thinking things are leaping out in front of the car, travelling too close to the curb, it hitting the mirror of a parked car, brake lights of the car in front come on suddenly creating severe panic reactions. Yelp, yelp, yelp. It is like a puppy having a bad dream. You want to wake it up but you know it has to go through the experience to learn from it so you let it yelp.

I am sore and reluctant to say this. I don't want to say it because if you say it it may sound like admitting it is happening. If carrying on regardless will somehow erase the experience, actually convince me that things are still alright, that my old life for us is there waiting as soon as I decide to take it up again. Drive myself instead of being driven. Read a book to myself instead of having it read to me by an audio book program/player. One can appreciate the relative affability of a room with cool lighting instead of turning on the lights all the time, or a torch on my phone always to hand, just in case, to act as my warning, to illuminate my fear of the dark, of the unknown that is right in front of my face.

The ability not to yelp out loud is progressing well. Instead of focusing or trying to focus on external objects out of the car window there is a kind of have a little turn off switch that source that reduces my awareness. Warnings keep trying to infiltrate my defences but I have to keep telling myself there's nothing going to harm you. It's like reprogramming my whole wary by life's mishaps thinking into some new framework notably the person with you is looking out for you, is put in their own selfish needs to one side to give something of themselves to you. Their protection and, perhaps for the first time in my life, I have to implicitly trust the person. That's hard to say and hard to do. It's hard to just step out into the road and someone standing next is his cross now but I need my friends to say that to me. To protect me now that I'm more vulnerable. I would rather, no I wouldn't, sit at home in my so man cave its own real, familiar world, that sometimes, just sometimes, are can forget what has happened and that maybe, just maybe it didn't happen at all.

Just as I learnt to curb relative excesses of the back seat driving days I know have to curb my yelp days. Attempts to enjoy the speeding blur of shop phones and cars will provide some enjoyable pleasure is a slowly and reluctantly accept me never drive again.

Yelp. Inside my head. 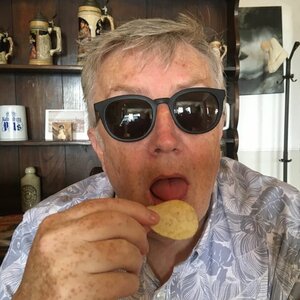